How Does A Salt Water Pool Work and What are the Pros and Cons? – Seasonal World

How Does A Salt Water Pool Work and What are the Pros and Cons?

Categories
Tags
A salt water pool is fundamentally no different than any other inground swimming pool.  The only difference is the way the pool is sanitized.  Instead of using chlorine tablets and shock it uses a chlorine generator.  Whether or not to get one is really a matter of personal choice. 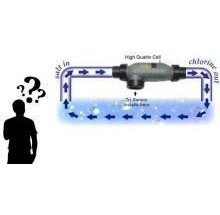 HOW ARE SWIMMING POOLS TRADITIONALLY SANITIZED?

In the standard chlorine system there is generally an inline or offline chlorinator connected to the filtration system.  The end user typically fills this with chlorine on a weekly or biweekly basis depending on the size of the pool, and the amount of usage the pool gets.  This is the most common way that chlorine gets distributed into a pool.

The salt system or generator is purchased and gets installed on the pressure side back by the filtration system of the pool.  This salt generator basically consists of a control box and a salt cell.  The salt cell has metal plates in it which are connected to the control box.  The control box sends an electrical charge to the plates which creates chlorine through a process called electrolysis.  As pool water passes through the salt cell, the salt in the water is turned into Hypochlorous acid.   Hypochlorous acid is the same component that is produced when any chlorine is added to pool water, whether you use sticks, tablets, granular or liquid. As the water returns to the pool, it will introduce the newly produced chlorine.

A salt water pool is also a chlorine pool because even though you are putting no chlorine into the pool the end result will be chlorine that is produced from the salt generator.

SO WHAT ARE WE TALKING ABOUT?

Salt water pools are not filters, not pumps, or even chemicals that are added to a pool.  What makes them “salt water” is the salt system which consists of the salt cell, the control box, and the salt that is added into the pool in a granular form.  This is done in an initial application and then in an ongoing basis as needed.  The control box has up and down arrow buttons that are easily accessed.  Depending on preference, you can increase or decrease the salt production.  Most of these boxes also have a boost mode that allows you to run the system at 100% production, which is the equivalent of manually shocking a pool.

WHAT ARE THE BENEFITS OF A SALT SYSTEM?

One benefit of a salt system is that the pool owners do not have to handle the chlorine in its physical form.  There is no storage of chlorine on the premises and no buying of chlorine tablets or shock on an ongoing basis.  In fact once the salt system is up and running and reaches normal balance levels within the water, there is generally less interaction with the chlorine.  Although this is still a chlorine pool, the water does feel softer than pools with a traditional chlorine system.  Another benefit is that when the salt is added to the water and salinity is at the optimal level there will not be as many continual trips to a pool store to get chlorine or shock which is used with traditional types of chlorinators.

SALT WATER SOUNDS GOOD!  SO WHAT ARE THE DOWNSIDES?

The initial investment in the salt generator is substantially more than regular chlorine based system.  Salt can be a corrosive material so certain precautions have to be taken by any reputable pool installer or service company.  Typically items such as handrails and ladders which are normally made of steel should be converted into some sort of composite, sealed steel, or plastic which prevents corrosion.   Any good pool builder or service company will suggest adding a sacrificial zinc anode next to the filtration system.  This will absorb some of the stray current which is present in the water as a result of the salt system. Zinc is a soft metal.  The stray current will attack the anode first. As these anodes are easily replaced they will take the abuse rather than most of the other metals that are in the pool.  Pools have stainless steel screws in the face plates, light rings, step trims as well as the anchor sockets which hold the rails and ladders.  If there is a heater in the pool the heat exchanger will also be made of copper or titanium. Splash out which can occur during general use of the pool, and people walking around dripping water from their bathing suits onto the deck, may cause some issues especially if the decking is non salt friendly such as travertine, certain styles of bluestone, or flagstone.  As the water evaporates it can leave a million parts per million of salt residing on the deck.  It is far more corrosive than the typical chlorine based pool due to the residual salt that will always be in the water.

The chlorine that is produced in a salt water pool is a non stabilized type.  Tablet form of chlorine (stabilized) is available informs that contains algaecides, clarifiers, and PH balancers built right into them.  The salt system produces only this type of chlorine that usually creates a very high pH level.  The pH balance is important in maintaining water clarity as well as the preserving the integrity of some of the materials used in the building the pool.

SO THE DECISION IS…

Whether or not to use a salt system in your pool is a matter of the pool owner’s discretion.  It is a trade off on what you think is more important.  To find out more about salt water pools please read the Seasonal World Blog:  “Common Misconceptions of Salt Water Pools”.